The Equalizer Queen Latifah Green and White Shearling Coat were worn by the main character of this crime drama television series Robyn McCall. Due to Queen Latifah’s influential outlook and outrageous performance The Equalizer is gaining immense hype and attention. Her attire in the series is trending and catching the eyes of every fashion freak.

Queen Latifah Coat in The Equalizer speaks volumes for her character and persona. While following her own vendetta, Latifah can be seen seeking justice throughout the show, alongside many talented and graceful personalities. If someone knows how to carry herself well while participating in those breath-taking action scenes, it’s her!

The Equalizer Queen Latifah green and White Shearling Coat is what caught everyone’s attention and became the talk of the town. After a lot of demand, MLJ has made this jubilant outerwear a part of their collection.

Queen Latifah as the Equalizer

Queen Latifah played the role of a former CIA operative named Robyn McCall. A single divorced mother, who claims herself to be an equalizer. Latifah is seen in action, in order to help those in need, the mystery skills of her came upfront, which left people amazed! As she protects those in need with nowhere else to turn. After working for a company that inducts illegal operations in the US government. She decided to leave her job, to raise her daughter until she becomes the savior of millions.

Queen Latifah Green And White Shearling coat is made keeping your convenience in mind, its sumptuous features like; zipper front closure, standup collar, multiple pockets, and soft polyester lining protect, from the cool breeze of winter while giving its touch of elegance on the silhouette. Queen Latifah Green and White Coat half-section are manufactured with shearling fabric, whereas the other half has a polyester fabric. Sounds interesting,, doesn’t it? This ambrosial two-shaded and fabricated coat is what makes it vintage. Together they make this unique sophisticated combination, which gives a deluxe vibe to this Shearling Coat. It may sound complicated or you might think twice before ordering this Queen Latifah The Equalizer 2021 Coat, but once you get this ebullient attire at the palm of your hand, get ready to embrace the compliments waiting for you.

Is Robyn McCall Green And White Shearling Coat Worth Buying?

Now it’s your time to get back into the fashion game, with this astounding apparel and show everyone how awe-inspiring you can be! Place your order now to get a touch of grace even in your personality and stand out from the rest of the crowd, every time you step out of the door. Because that’s how the world works and you should be the one starting the trend to leave an ever-lasting impression.

The Queen Latifah Green And White Shearling coat consist of two-color i.e., olive green and white making the attire two shades. Along with that two different materials are used polyester and shearling making the attire lavish.

The intriguing and enchanting Queen Latifah Green And White Shearling coat is inspired by the crime drama television series “The Equalizer”.

The Equalizer is an American crime drama television series. It was premiered on CBS on February 7, 2021.

Queen Latifah is a Grammy Award-winning rapper, record producer, and actress, known for her roles in the big-screen adaptation of ‘Chicago’ and the TV film ‘Bessie. She was recently seen wearing this green and white coat in one of the scenes in the series “The Equalizer”.

There is so much hype for the Robyn Mccall TV Series The Equalizer 2021 Queen Latifah Green & White Coat because of its unique texture and hues.

Queen Latifah Green And White Shearling coat is best for the harsh weather and also maintains the level the style. As it has been manufactured by using material that retains body heat.

Yes, absolutely to this day we are still waiting for Fuqua to release The Equalizer 3. 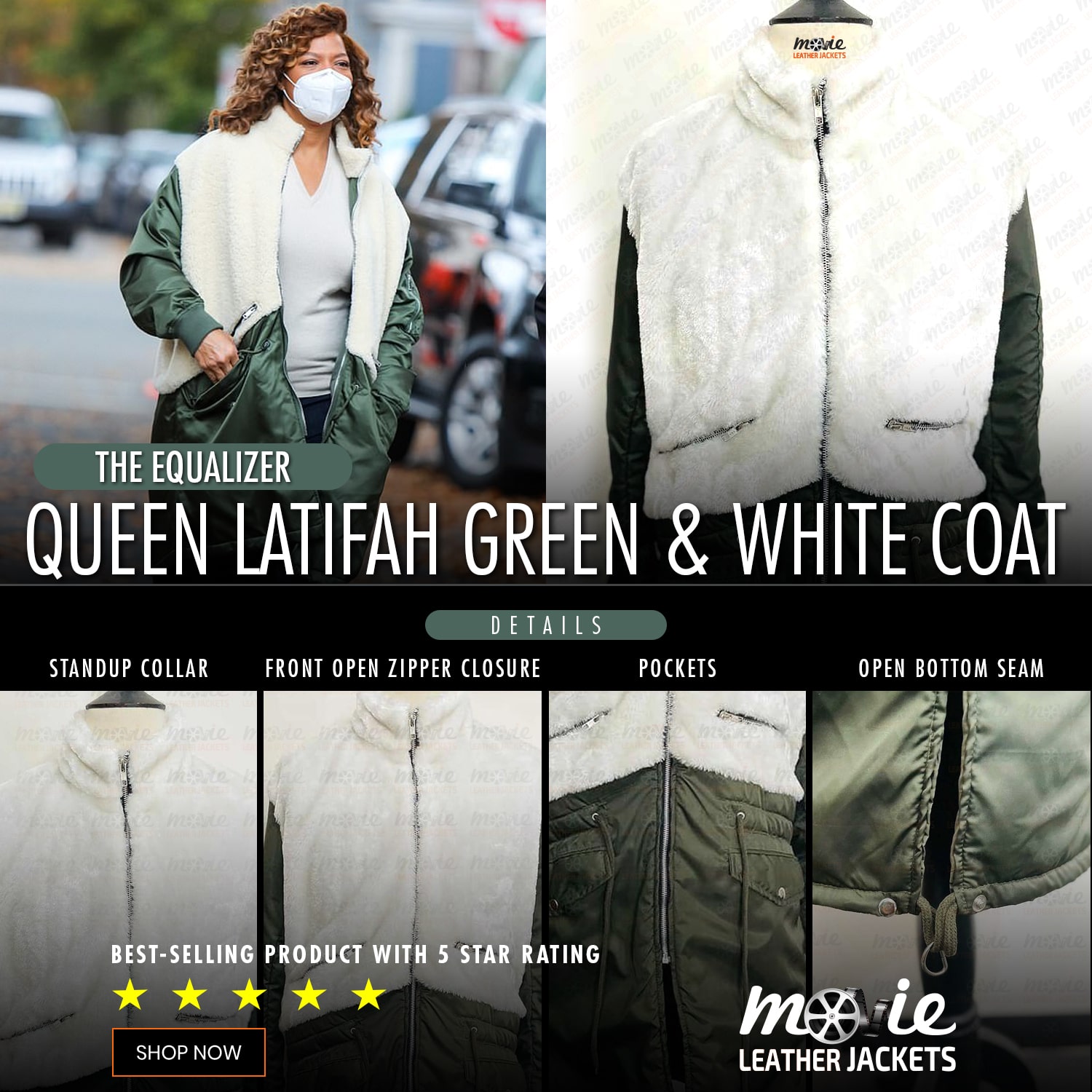