Over the past four years, crime thriller Money Heist has burst into a global phenomenon. It began life on Spanish terrestrial television before it quickly made its way to international audiences through Netflix.

Watching Álvaro Morte AKA the Professor and his gang tackle impossible heists has gotten viewers hooked. Although everything began with The Royal Mint, the heists quickly spiralled out of control with The Bank of Spain.

There’s no telling who will get out alive and where the story can go next as the story reaches its final chapters, especially considering the sheer number of turns and twists that the audience has seen so far.

Look no further than our full 5 seasons Money Heist recap if the shows last hurrah has got you stuck into the display. If you’re looking for the dramatic events to be lessened through a refresher, and then we have got you the perfect whistle-stop tour which takes you through the 5 seasons. 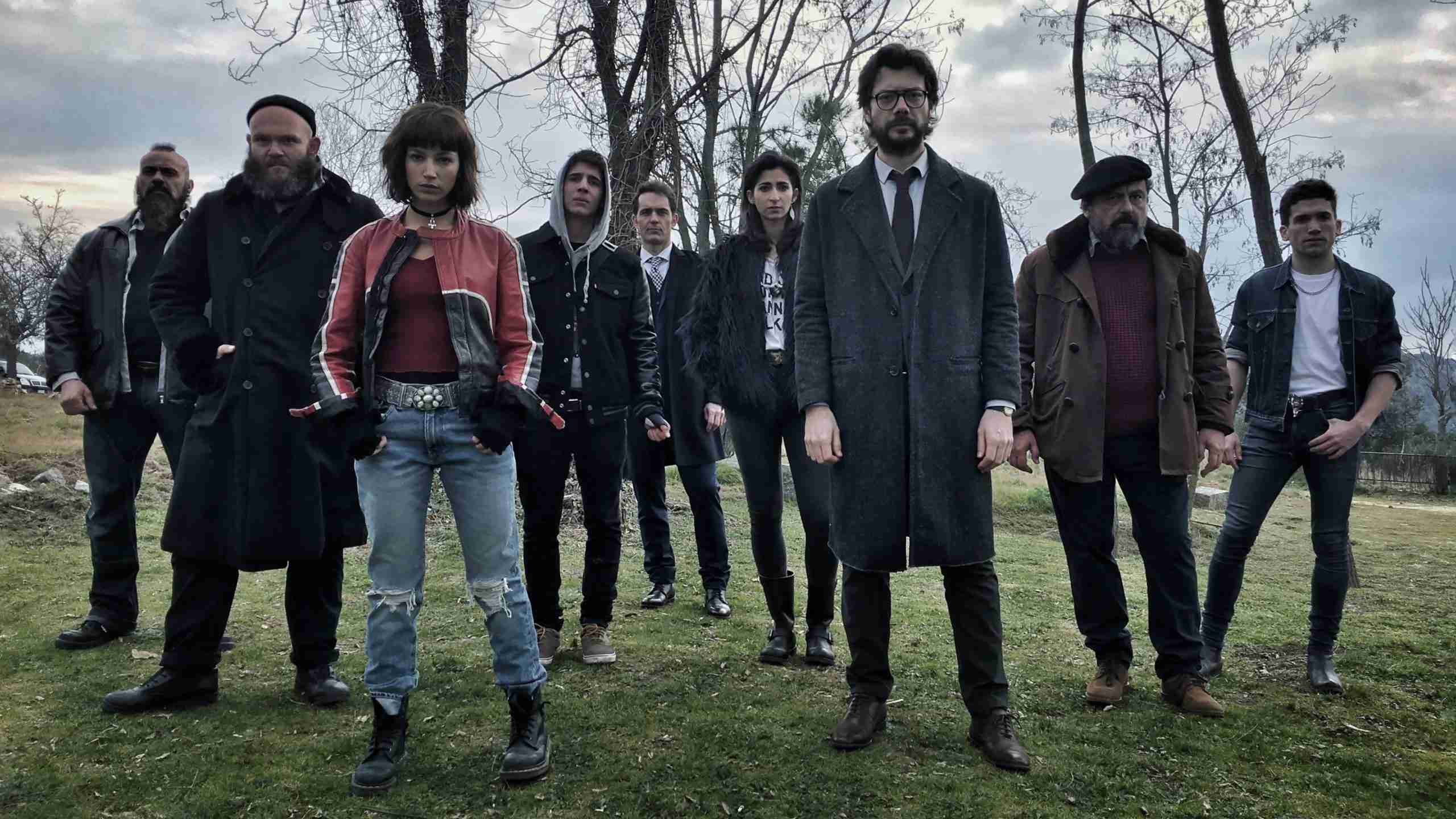 Money Heist is noted for its subversions of the heist genre. The series reframes the typical heist story that is often told with a male Anglo-centric focus. Instead it is told from the point of view of Tokyo; a female perspective for a change!

The first season kicks off by Tokyo being introduced as a young woman on the run after a botched robbery. The professor fortunately intervenes and asks her to be part of his team when an armed police squad waits to arrest her. Ultimately, she decided to go along with the plan and heads on to meet the rest of the crew. As a pseudonym, the crew uses the names of major cities.

Robbing the royal Mint is the big idea. They hope to bring in €2.4 billion in unmarked bills by locking the place down and taking 67 hostages.

Getting straight into the action, we are introduced to Arturo Román and Monica Gaztambide. Unfortunate for her, when she tells him that she is pregnant with her child he tells her to get an abortion. We are then introduced to Alison Parker whose classmate threatens to share her revealing photographs with the world.

The gang then breaks in sporting red jumpsuits. For those interested, Movie Leather Jackets is a great place for if you’re looking to purchase the jumpsuits. Moving on, everything goes as the Professor planned it. The Spanish crime drama is able to keep the audience enthralled tanks to the action packed storyline that goes on within the Royal Mint.

It should go of as little surprise that the police also arrive on the scene. Raquel Murillo is the lead investigator tasked with rescuing the hostages and negotiating with the robbers. Throughout the season 1, there are flashbacks showing the preparation that took place within the 5 months.
The robbers inside the Mint, throughout the season, face uncooperative mutiny, violence, and hostages. Through voice-overs, Tokyo narrates events. A love affair is pursued by Denver with Mónica Gaztambide. On the other hand Raquel Murillo begins an intimate relationship with “Salva.”
With €984 million, the robbers escape the Mont after 128 hours. However, Berlin, Moscow, and Oslo are killed. Raquel reunites with the Professor one year after the heist through a series of postcards left by him which had coordinates jotted down. 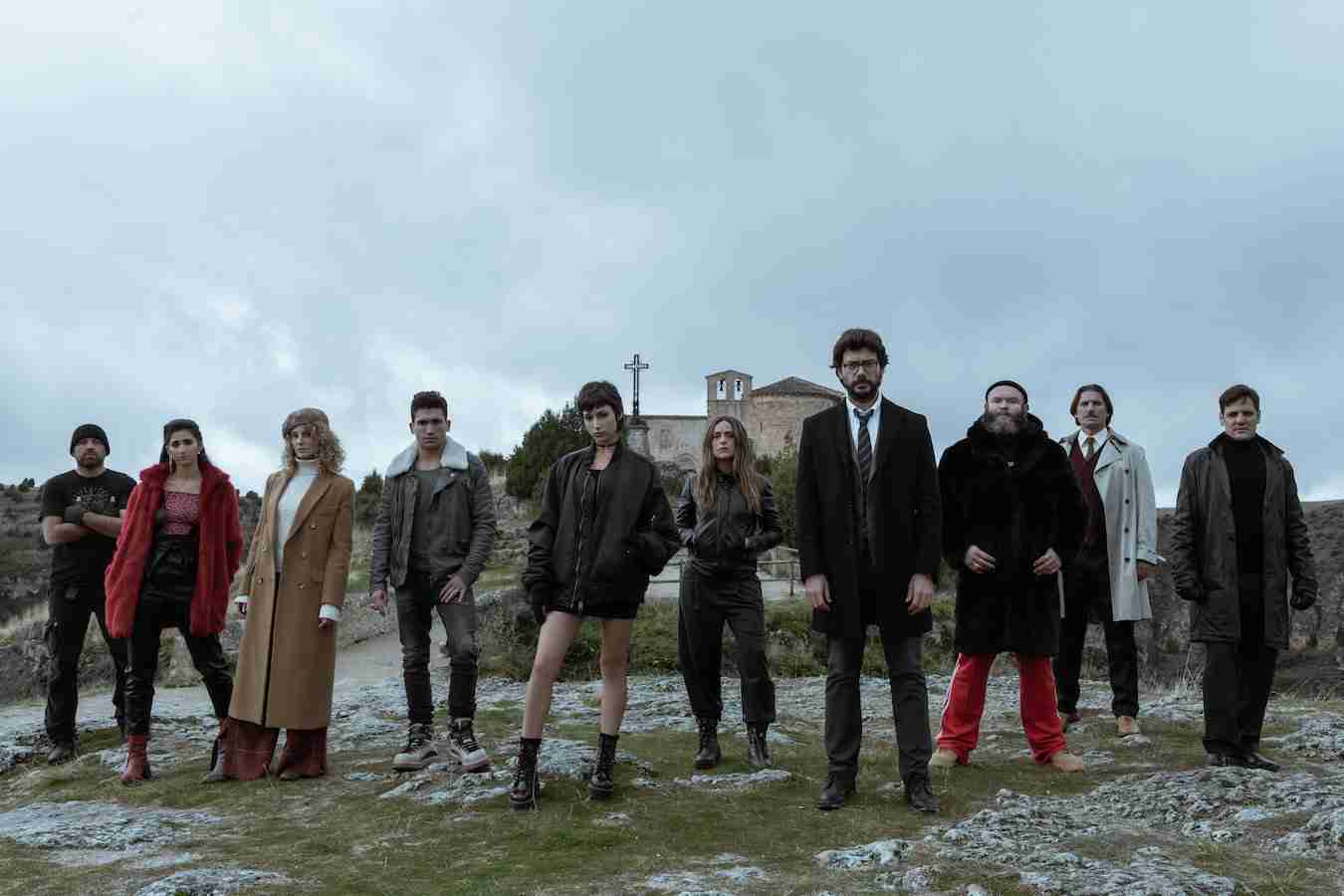 Three or two years after the heist on the Royal Mint of Spain, part three begins as it shows the robbers paired up in different locations, enjoying their lives. The professor picks up old Berlin planes when Rio is captured by Europol through n intercepted phone.

To prevent Rio’s torture, the professor plans to attack the Bank of Spain. Racquel now goes by Lisbon. Raquel and the Professor together get the gang to meet up. With Palermo is in charge, there are some new members enlisted including Marseille, Palermo and Bogota.

The new planned heist is outlined through flashbacks with Berlin and the Professor. The heavily guarded bank is sneaked into by the disguised robbers as they again take to hostages and gain access to the state secrets and gold.

Bogota and Nairobi get to work by starting to crack the safes full of gold. However like everyone else, they have a lot on the line because if a break-in is detected, the safe is designed to flood. For safe transformation of the gold, they are fortunately prepared with welding and scuba gear so that an air lock can be berated between the room and the safe.

While communicating with the police and the robbers, the Professor and Lisbon travel in an RV.  Led by pregnant inspector Alicia Sierra and Colonel Luis Tamayo, the police are forced into releasing Rio to the robbers after there is thwarting of a breach in the bank.

The police catch Lisbon, and Nairbole gets seriously injured through sniper shots in the chest after an infliction from the police. Meanwhile, with various schemes, the professor remains hard at work as he sends Marseille to Algeria for evidence on the torture tactics to be dug up. The new strategy of the Professor involves him distracting the police from the heist through bombardments.

The professor declares DEFCON 2 on the police after radioing Palermo believing that the police have executed Lisbon and there has been another police assault on the bank. Lisbon by the end of season 3 is alive but in custody. Tokyo narrates that the war has begun and the Professor has fallen for his own trap. 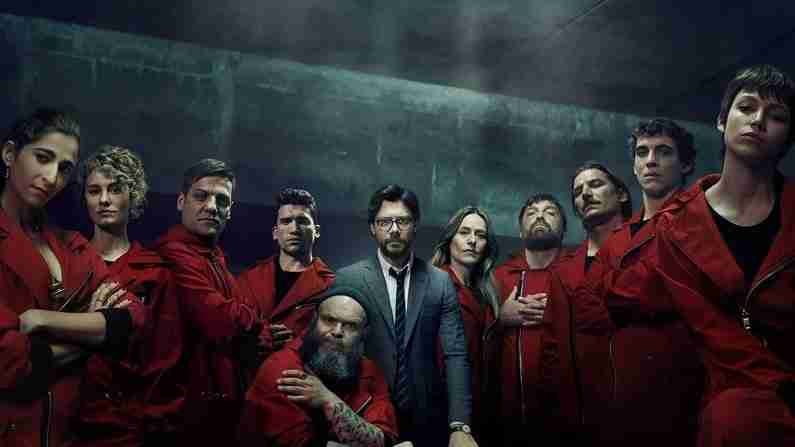 Season 4 begins with Nairobi’s life being attempted to be saved by the robbers. The Professor and Marseille take away that Lisbon is being interrogated by Sierra and is alive outside of the bank. Meanwhile, a coup d’état is being staged by Tokyo as she takes over command.  The Money Heist Tokyo Jacket worn in this scene is a fan favourite.

The blast send shrapnel into Gandias back after Denver throws a grenade in his direction before he makes a run for his escape room. During this time, Money Heist S04 Denver Jaime Lorente Leather Jacket is worn by Denver at an attempt to bring out his distinct character.

Antoñanzas, Tamayo’s assistant, is being persuaded into helping the Professor so that the police and the robbers can establish a 48-hour truce. The restrained Palermo creates chaos so that his command can be re-established as the group manages to save Nairobi’s life. Palermo colludes with Gandia who is the Bank of Spain’s restrained chief of security.

From within a panic room inside the bank, Gandia escapes and starts to communicate with the police while participating in a violent mouse-and-cat game with the group. As the trust of the group is regained by Palermo, he re-joins them.

In a turn of events, Nairobi is killed instantly after Gandia shoots her in the head. Even though he tries to escape, he is recaptured by the grand. The Professor in the meanwhile exposes the holding of Lisbon to the public and the torture of Rio as unlawful as the police gain prepares to assault the bank.

For overseeing the torture, Sierra is told by Ramaya that she won’t see jail time, but in order to protect the credibility of the armed forces and the police, she will have to take full responsibility. Having her reputation soiled is not something that makes her happy so she tells the press that the government and every senior figure in the armed forces approved of what she was doing. She does this opting to bring everyone else down with her.

A pursuit of the Professor is begun by Sierra as she is fired due to this relation. So as to free Lisbon after she has been transferred to the Supreme Court, external help is enlisted by the Professor. An elaborate breakout opportunity to the Professor is provided for orchestrating a breakout.

Raquel’s transport is intercepted by his associate at an attempt to smuggle her through a fake police helicopter abroad. The craft carrying Raquel is dropped off without any suspicion after a rescue craft from Tamayo is demanded by the gang forces Gandia.

As a major victory, adorning the best outfits of Money Heist, the gang and the professor celebrate Raquel’s arrival, once again confident that their heist has been a success. Deirra since her dismissal has been doing some investigation which is why their major victory is very short-lived.

With Seirra finding the hideout of the Professor and the hand being re-joined by Lisbon within the bank, part 4 concludes with the Professor being held at gunpoint by Sierra. 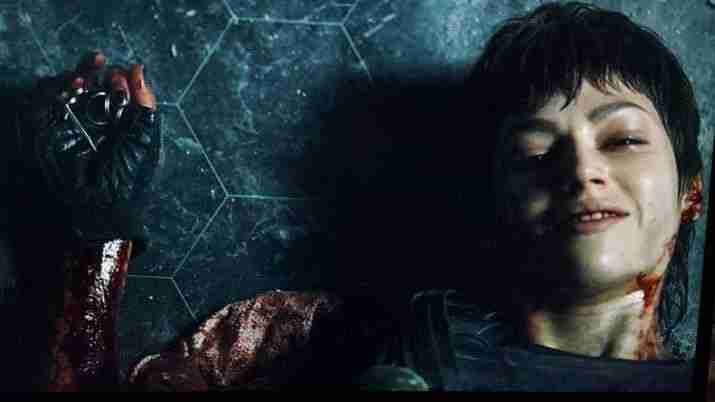 Season 5 kick off with Seirra locating the professor’s hideout and proceeding to knock him out, tie him up, and interrogate him. The gang prepared for an attack by troops of the Spanish army after the bank is entered by Lisbon.

Tamayo has him join the assault by the soldiers after the gang frees Gandia. Lisbon tells the gang they should not give up even after finding out that Seirra has caught the professor and that he is under interrogation. Marseille and Benjamin find the professor with Seirra. However, things don’t go according to plan and both of them proceed to be knocked out and tied up by Sierra.

Seirra frees the Professor, Benjamin, and Marseille when she struggles for her baby to be delivered. She does this so that they can help with the delivery. After giving birth to a daughter, Sierra names her Victoria.

A hostage in the Bank of Spain and the royal Mint, Arturo Roman, before the first heist, has an affair with Stockholm. Denver is angered by Arturo Roman reminders. When hostages including Arturo Roman and the governor of the Mint start a rebellion, Arturo is shot by Stockholm. Because of this he is released so that he can get medical care.

Berlin, in a flashback convinces Rafael- his son, to help him, Marseille, Bogota and Tatiana to steal 12 kilograms of gold. The gang starts fighting the soldiers in the present in order to take commotion away from a severe injury that Helsinki sustained.

After shooting Arturo, Stockholm feels a deep sense of guilt especially since he is her son’s biological father. While nursing Helsinki, she takes morphine which does not let her aid in the defence of the gang as their fighting against the soldiers. Tokyo sacrifices herself to the soldiers and Gandia as Volume 1 of season 5 ends.

As an important part of the personality of the series, the producers regarded the cultural identify as the story would be more relatable to viewers. The series was also not adapted to international tastes which helped in setting it part from the typical American TV series and other competition.
Not only that but with the show becoming a worldwide phenomenon, the costume designer throughout the seasons have upped their game by introducing better and better cutting edge Leather Jackets. 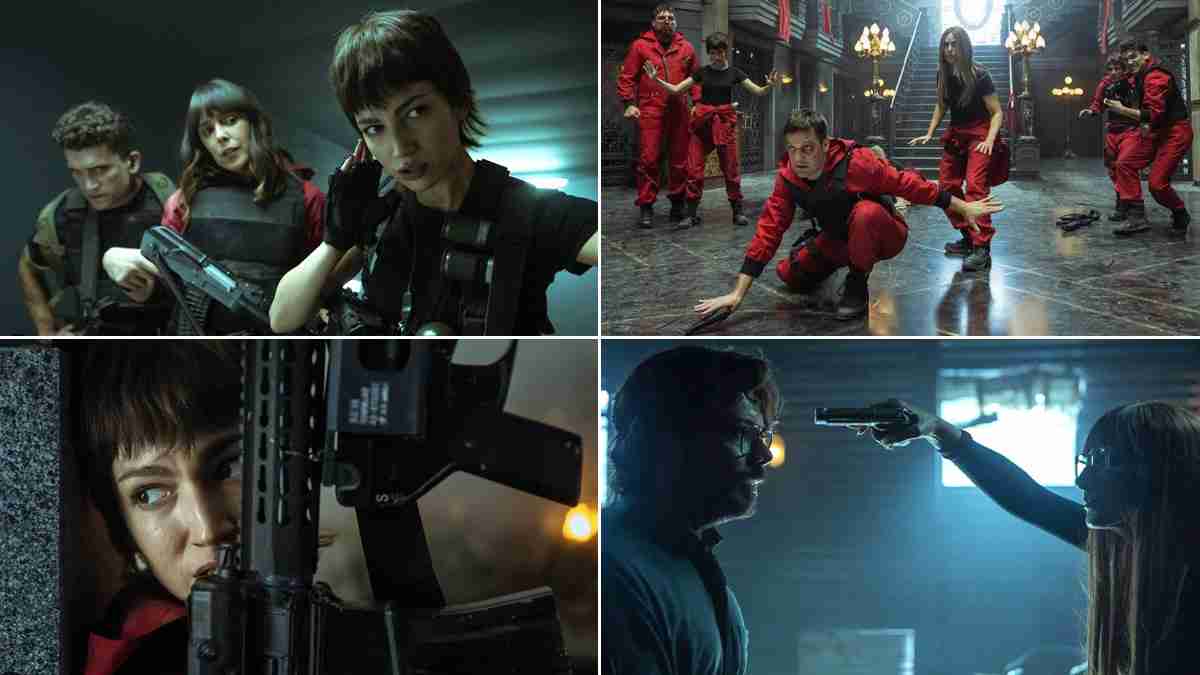 The characters were designed as complementary and multidimensional antiheroes and antagonist whose moralities are ever-changing. As characters are immoral and relatable at various points in the seasons, the writers leave it up to the audience to decide whether the characters are bad or good.
The series gives female characters the same attention as men, as the relative number of female main characters is generally on the rise in TV shows. Around the globe, this Spanish crime drama keeps fans enthralled thanks to its action packed and tense story line.
In the next season 5 volume as well, Money Heist is set to come to a thrilling conclusion. In the meanwhile, we hope you enjoyed our take on everything that has happened so far. 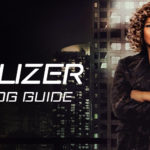 7 Leather Jackets To Gear Up Your Formal Wears 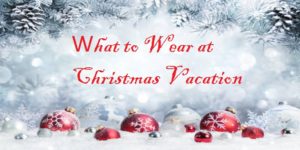 What to Wear at Christmas Vacation?

Every Coat We Need to Discuss From “Emily in Paris”